Different Types of Snow and How They Affect Your Technique

It’s always good when you arrive at the resort to find there has been a huge snowfall recently.

No scraping over grass and rocks for you.

But then you overhear someone complaining about crud snow, or someone saying the slopes are hard-packed.

You might not know what this means but the look on their face means you know it’s less than ideal.

But what does it mean? Surely snow is snow?

It’s either there or it isn’t.

Well, as you get more comfortable on the slopes, you’ll begin to realise that not all snow was created equal.

So, which type of snow is best? And how does the snow affect your technique?

Read on to find out about the most common types of snow and what they mean for your time on the slopes.

This is the dream for almost everyone whether you’re on a board or skis.

Powder occurs when there’s a massive dump of fresh snow which hasn’t been touched by the piste bashers and isn’t changed by extreme weather conditions (see breakable crust).

Fresh powder is light, soft and a lot of fun; you can glide through powder and it’ll feel like you’re floating. 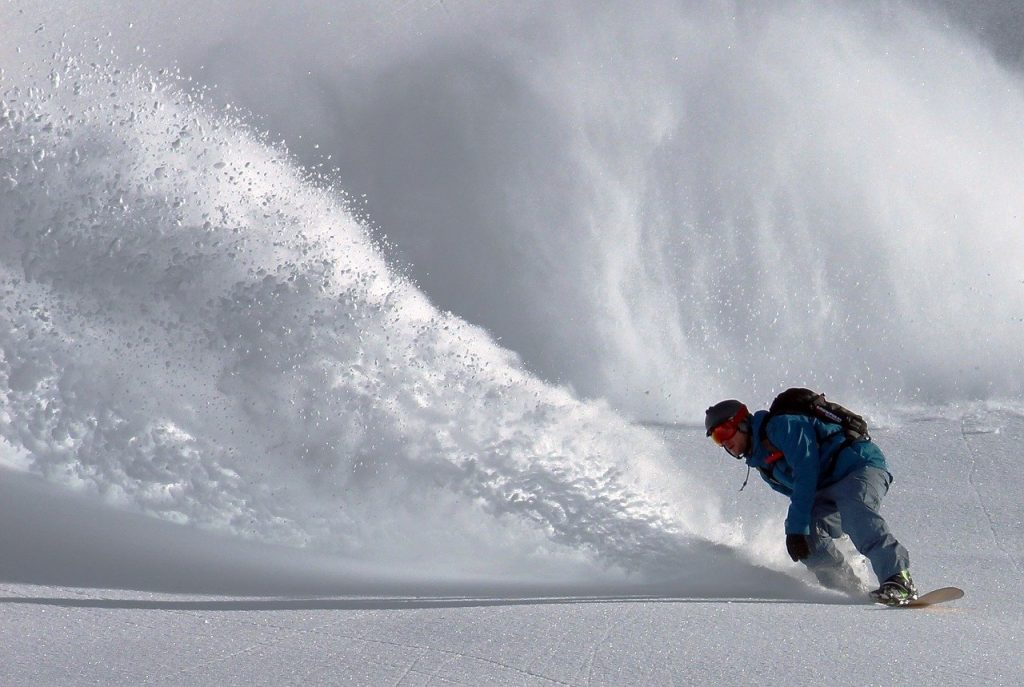 It isn’t often found on the pistes due to nightly grooming in most resorts so you’ll probably have to head off-piste to find some but it is very much worth it.

Skiing in powder is very forgiving if you do make a mistake and take a tumble because you’re sure of a soft landing.

However, to avoid falling on your face you will need to change your technique slightly. It’s a good idea to keep your weight slightly back compared to where you would normally.

This will prevent tips of your skis getting stuck under the powder and tipping you forward.

Don’t lean back too much though as this can use extra energy in the turns and make you tired. Use your poles to control your turns and keep a regular rhythm to help make the turns in deep snow easier.

When this is only a thin layer, you may barely notice it as it breaks so easily and when it’s very thick, you can ski comfortably over the top without worrying.

However, the problem comes when the crust is somewhere in the middle.

One minute you’re cruising along under the crust in what feels like fresh powder and the next second you slam into a patch of much harder snow.

Anyone who has experienced this knows exactly how much the shock can vibrate up your shins and into your knees. Not pleasant.

Mostly, you’ll want to avoid this type of snow if you can but if it is unavoidable there are two ways that you can tackle it.

A more aggressive style of turn that involves a small jump to ensure you are clear of the snow is effective, but tiring.

Alternately, you can step turn at a slower speed so you have time to adapt to the changing conditions.

Whatever you choose, make sure you keep your knees flexed to absorb any sudden impact and prevent jarring.

Much to the confusion of many, this does not mean ice.

Ice is far from ideal but hard-packed snow can sometimes be exactly what you want.

Hard-packed snow is the product of fresh snow falling, then being warmed up by the sun and skied on daily, and then cooled at night and smoothed by the snowcat machines.

It takes time to form.

The result is a mass of hard-packed snow which is smooth, clean and fast and can be a great day on the slopes.

You’ll need to make sure you’re using your edges to grip in the turns but generally, skiing on hard-packed pistes isn’t too challenging.

Crud seems to be the type of snow which divides people the most.

Some love it, some can’t stand it.

Crud is what happens near the end of the day when the everyone has cut up the snow and it has piled in some places creating lumps and has been swept clean in some places exposing the hard-packed snow beneath. 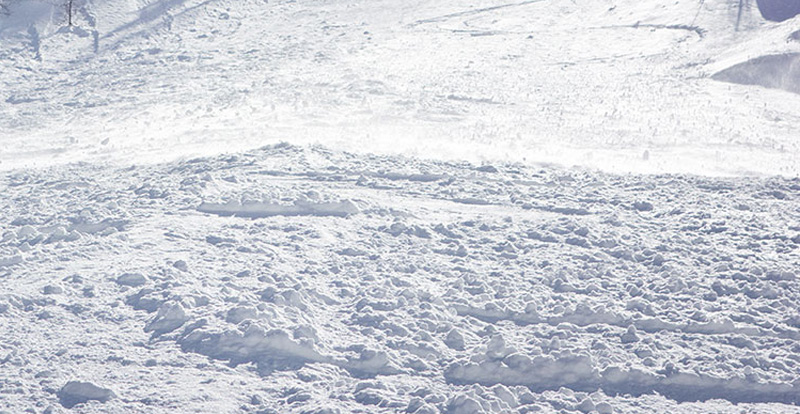 For some, this is a great chance to practise technique, jump and twist over the bumps, pick up speed in the smoother sections and spray their friends with the excess snow.

For others, it’s a nightmare combination of surfaces which hurts the knees, panics those who haven’t got to grips with their edges and tires the legs.

Whatever you think of it, it requires technique.

As with breakable crust, you’ll need lots of flex in your knees to deal with the sudden bumps. If possible, get comfortable with your edges and keep your turns regular and smooth.

Easier said than done considering you’ll most likely encounter crud snow at the end of a long day.

The type of slope almost everyone dreads.

No matter if you’re a beginner or expert, an icy slope can present many problems.

Icy conditions are formed when snow is melted and refrozen so many times that the to layer becomes slick, slippery and smooth like glass.

Icy conditions also occur when there has been no new snow for a long time so the snow on the slopes has been compacted over and over leaving it very hard, solid and worn smooth.

An extreme version of hard-packed snow, if you will.

Skiing on ice requires a lot of edges to remain in control and not slide wildly through the turns.

Keeping your moves subtle and controlled is key to not losing grip and sliding down on your backside! Keeping almost all your weight on your outside ski will really help.

Having said that, some people prefer to skip the turns altogether. Icy slopes can be great for picking up speed if there aren’t many people around and lots of racers hope for icy conditions to reach top speeds.

It does make stopping an issue though…

Slush is a pretty easy one to both recognise and deal with.

Because it’s that much wetter, it’s also that much heavier and can stick to your skis, weighing you down. 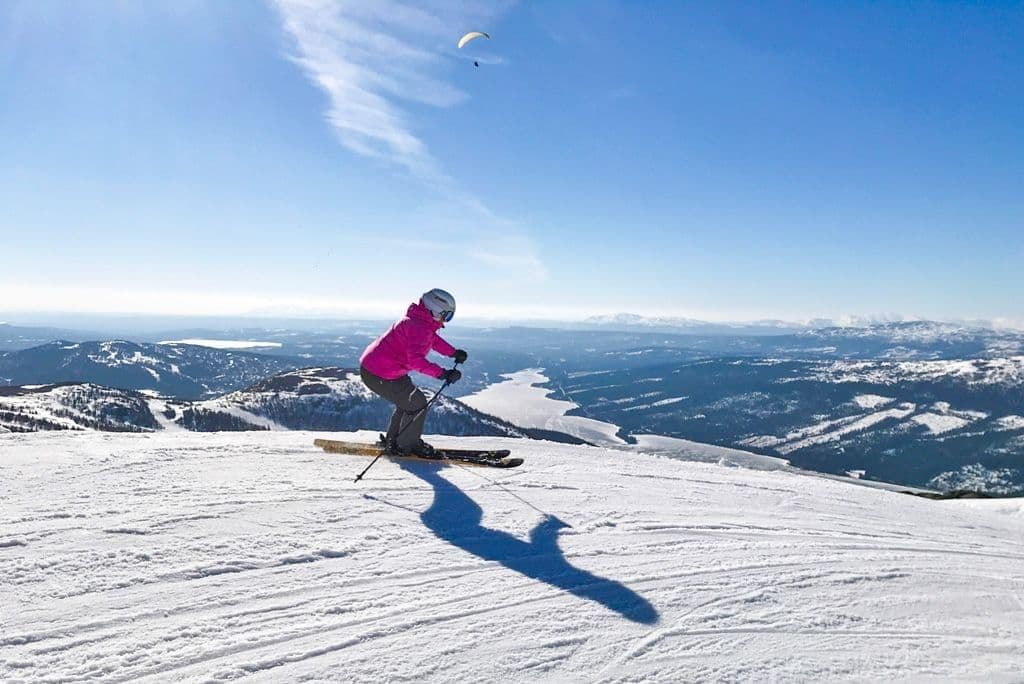 You’ll need to keep your turns smooth and try to stay on edges to avoid wasting your energy.

Slush breaks up pretty easily so you won’t need to worry about hitting large chunks of solid snow and getting shocks up your shins.

Finally, a little bit of a different one to end on, artificial snow.

Most big resorts have snow cannons which are turned on at night if there hasn’t been much natural snowfall recently.

The snow cannons fire high-pressure water into the air when the air temperature is below zero. 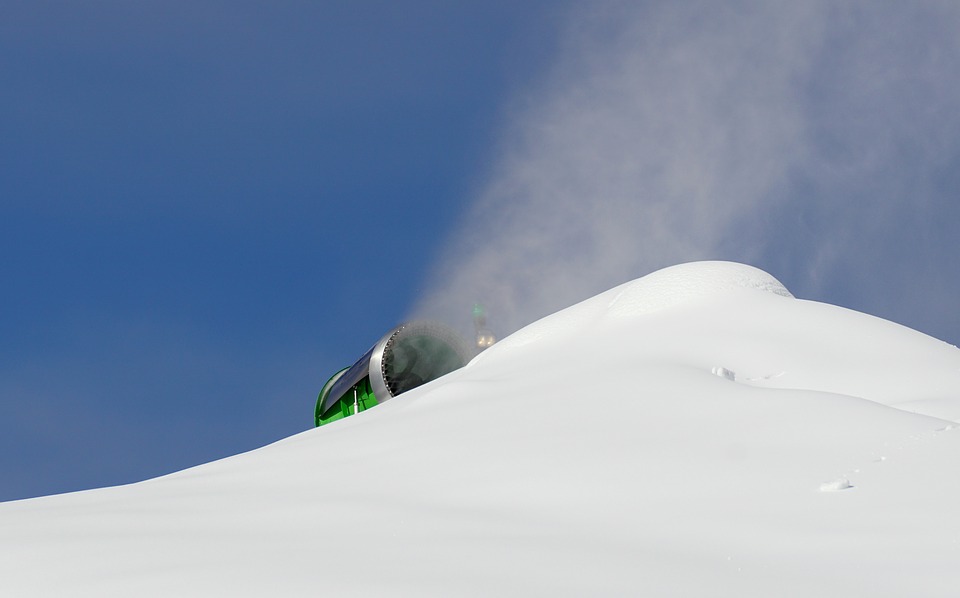 The water freezes but, unlike snow which is made of crystals, man-made snow is just tiny round balls of semi-frozen water. Consequently, it’s very hard and solid.

Normally it’s fine in the morning but later in the day, when it has been compacted further by everyone skiing and boarding over the top, it can become very slippery.

It gains an icy consistency but doesn’t always look like ice so is much harder to prepare for.