An attractive resort for boarders and expert skiers, Les Deux Alpes also offers a wide choice of runs and off-piste fun for beginners and intermediates. With the largest skiable glacier in Europe, the area has some attractive features, accessible in any season.

Fewer than fifty miles out of Grenoble, it is easily accessible, with regular bus runs right to the resort. You can leave the bustle of Heathrow and be on the slopes in a little over four hours.

The main village is built on a ledge, with a quaint, cobblestoned section called Venosc lower down. This isn’t a resort aimed at the posh and showy, though it is comfortable and friendly, and there are some luxury hotels on offer. Chalet Mounier is a four-star hotel (not a chalet) with an excellent restaurant (one Michelin star) and an Oriental-style spa that’s worth a try. More economical choices include the modern, alpine-themed Souleil-Or, or the Chalethotel Le Crêt for those who want a comfortable, newish room, but want to save their money for other things.

It’s worth checking out Venosc, which is linked by gondola to the main village. It has some nice restaurant choices, and it’s also just a cool little place to take a walk around.

With a relatively high percentage of green and black runs, and an intermediate offering toward the low end, it is a significant step from the average intermediate run to expert here, though there are some red runs that bridge the gap. Since the transition is largely about confidence and experience, most skiers in that position will still do fine. For the others, the runs are long and pleasant on the lower end, great for cruising, and what the expert runs often lack in pitch, they make up for in powder, and are augmented by an excellent terrain park.

The resort has the interesting feature of being ‘upside down.’ Snow conditions are reliable here, not just because of its upper range of altitude runs, but also because of the north-facing slopes that take advantage of shelter from the sun on warmer days.

The glacier is open all year round, with camps for boarders and skiers in the summer and autumn, with the main lifts opening in early December and rolling through to late April. La Grave is accessible from the resort as well, for those wanting to range around a little wider while there.

L’Avalanche Club has to take first spot here, and the fact that it is open from 11:30am to a whopping 6:00 in the morning should tell you what you need to know: they like a party, and they like it to go long. It can be a bit pricy, but most see it as a worthwhile spend. Le Pano Bar is another party-focussed establishment, and is often the first post-slope stop for many skiers. They have a DJ through the afternoon, but you’ll want to try other spots later on, as the action dissipates not long after five. For a choice (or a few choices) of a hundred different beers, Pub Windsor claims to have been serving up pints since the late 1930s, and in any case has a respectable pedigree for the area. It’s a friendly place, and often draws a crowd.

When hunger starts to call, you’ll have a full range of restaurant types and price ranges, from the reliable pizza joint L’Eli’s, to those specialising in local and classic French dishes, like the charming restaurant Le Paellou, to the stunning open fire of Le Diable au Coeur, perched on the side of the mountain at 2400m, serving up fine food (at substantial prices) for those wanting a full immersion in the sights – and tastes – of the French Alps.

Les Deux Alpes is not known for a wide range of activities off-slope (other than the parties and food), but there are things to do. Most hotels have pools, gyms, and spas, there is snowshoeing, hiking, skating, and other snow-related fun. For most regular visitors, however, the best thing to round off a day of skiing is a stroll around Venosc, a good meal… and a long party. 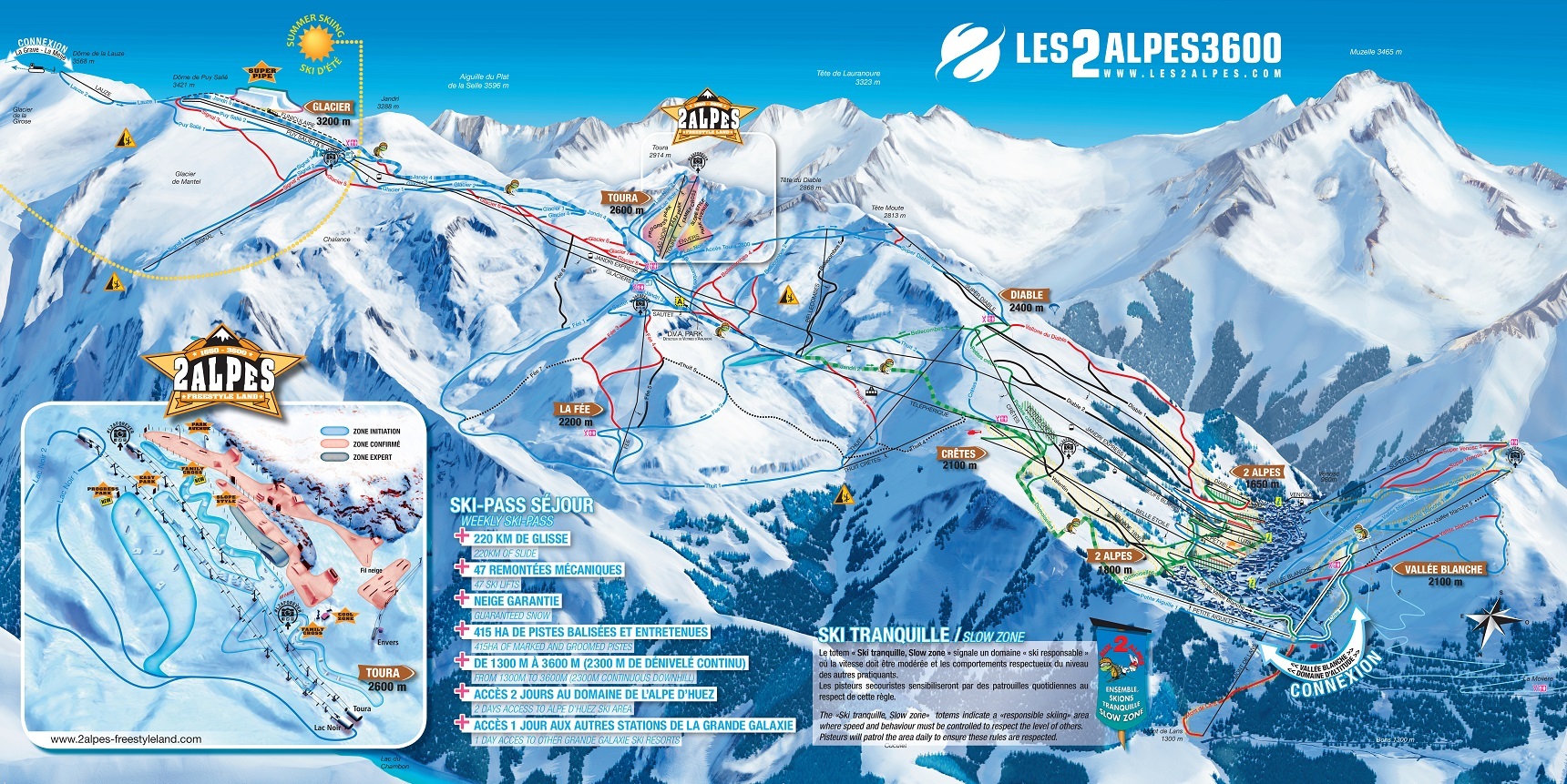