Good snow cover and an excellent choice of terrain make Tignes one of France’s most dependable ski resorts. And, combined with neighbouring Val d’Isere, it forms the immense Espace Killy ski area.

Unlike some ski areas, the two villages are closely linked with a good selection of runs and excellent connecting lifts making it easy to ski between them.

Tignes is completely different to its neighbour Val d’Isere. It’s essentially made up of five separate villages, located at varying altitudes, and its purpose-built style lacks a little of Val d’Isere’s traditional and upmarket charm. But that is OK as prices are generally lower in Tignes.

The main villages are set on a mountain plateau with some of the best lift access in Europe. It’s a stunning natural location and although it’s not quite matched by the architecture, in recent years much has been done to give Tignes a facelift and to move traffic out of the villages.

The five villages are Tignes Le Lac, Le Lavachet, Tignes Les Boisses, Val Claret and Tignes Les Brevieres – with all apart from Les Brevieres well connected by bus. Be sure to check which village you’re staying in before booking as each has a different character and access options.

Nightlife is a little fragmented and spread across the five villages. But the place to begin is the Folie Douce on the Val d’Isere side – just be sure to get the Tommeuses chair back to the Tignes side before it shuts.

In Le Lac, the Loop Bar, situated at the bottom of Rosset and Trolles pistes, is the place to be. Its bustling terrace is a great place for an afternoon drink and a top spot for late night dancing. The Marmot Arms is another popular bar in Le Lac and Jacks Club is the only nightclub in town.

Val Claret is the liveliest of the Tignes resorts. Here, the three floored Couloir is the place to go if you’re in the mood for a combination of drinks, dinner and late-night dancing. For more upmarket and relaxed apres head to Grizzly’s Bar, which looks like a classic North American wood cabin. The Drop Zone, Saloon and Blue Girl nightclub are also worth visiting.

Tignes has a number of easy-to-ride beginner lifts that operate free of charge, so you won’t need a lift pass for the first few days. The easiest green runs tare located around the villages, so getting to and from the slopes is straightforward.

Over on the Val d’Isere side there are some higher green slopes, but if you want to head up the mountain in Tignes you’ll have to tackle blue runs. However, the huge bowl above Tignes is traversed with wide open, long blue runs that are perfect for beginners.

Intermediates should take the cable car to the top of the Grande Motte glacier. The views are spectacular, and the 1300 metres descent on reds and blues is excellent. Plus there are more winding reds and blues down into Les Breviere that are worth exploring. With more than 300 kilometres of slopes and a choice of over 100 red and blue pistes, the Espace Killy is a recreational skier’s dream.

Advanced skiers have a choice of 20 black runs in the Espace Killy, including slopes used for the World Cup and Olympic Downhill events. The long, 1200 metres black descent from L’Aiguille Percee to Breviere is a real highlight.

Freestylers can hit the park on the Col du Palet, one of the biggest in Europe with a 600 metre halfpipe, plus jumps and rails. Tignes has invested a lot of money in its parks over the last decade, and there are features for all levels.

Given the size of the Espace Killy ski area, it’s no surprise that there’s a good choice of off-piste for powder days. Tignes Les Brevieres is perhaps home to the best snow, with tree cover and a wide choice of lines. From the top of the Aiguille Percee lift, turn right and there’s usually some good snow there. But it is possible to get stranded at the bottom so be careful and let someone know where you’re going.

At Le Lac the best powder is found around the Chardonnet and Palafour lifts. There’s also an opportunity for fresh tracks under the Grand Huit lift. Around Val Claret and up to the Grand Motte there is great off-piste between the marked slopes.

The Bellevarde side of the ski area has plenty of off-piste options too. The Banana is a large vertical drop but snow can heat up here so it’s best to go first thing in the morning. The Charvet area is perhaps the best known off-piste in Espace Killy with many options, but beware there is a risk of avalanches in the area. 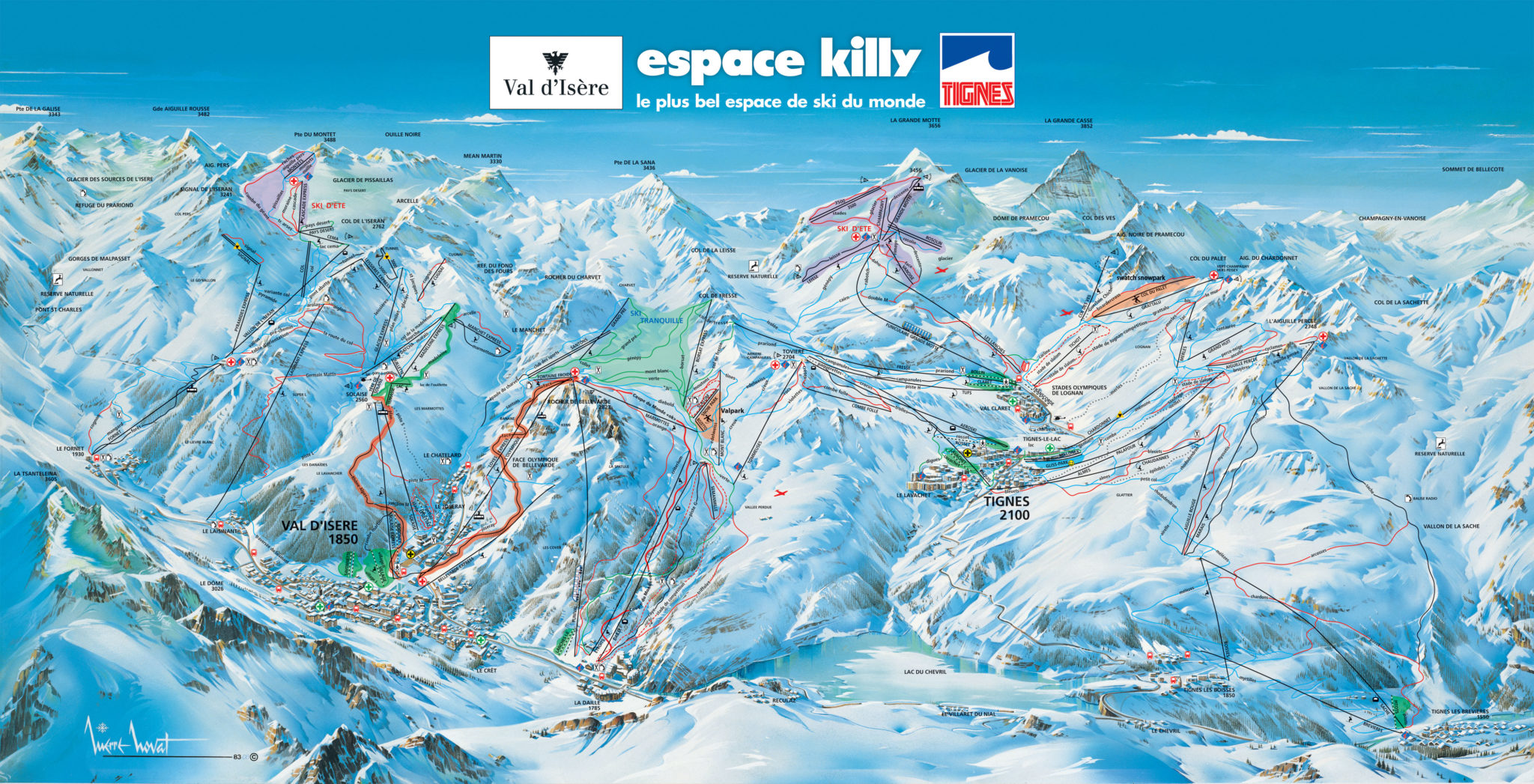